Like present day violence and religious bigotry being fought in today’s world, Marc Headley in his book and his Internet postings has incited hatred toward the leader of the Church of Scientology.

"While Marc Headley and I were stationed at the same international headquarters property for nearly 15 years, his views of some of Scientology founder Hubbard’s writings and my views differed greatly." —Marty “Kingpin” Rathbun in Marc Headley’s self-published diatribe...

On Monday, May 24, 2010, Los Angeles Federal District Judge Gary Allen Feess sentenced Brian Thomas Mettenbrink of Grand Island, Nebraska, to 12 months in federal prison and a $20,000 restitution fine for engaging in a cyberattack in January 2008 on Church of Scientology websites (CR No. 09-1149-GAF).  Mettenbrink is a member of the hate group “Anonymous,” many members of which have been investigated or convicted of federal and state crimes over the past three years.

Another member of the hate group Anonymous, Jacob Speregen, was sentenced today in New York City Criminal Court in connection with a January 8, 2009, attack on the Church of Scientology of New York. (People vs. Almahadin, Mahoud; Criminal Docket 2009NY007516). In 2009, Speregen accompanied another member of Anonymous, Mahmoud Almahadin, who  smeared himself with Vaseline and assorted detritus, ran into the New York Church just off Times Square and desecrated the Church, including causing damage to Scriptural materials. Speregen videoed the attack as a co-conspirator with Almahadin and other Anonymous members.  Speregen’s sentence forbids him from going near the Church of Scientology for five years. He was also sentenced to pay the damages caused by his acts and to perform substantial community service as further restitution for the crime. 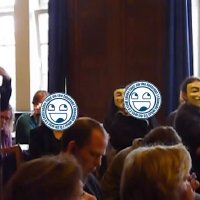 It should come as no surprise that Marc Headley has been an active member of the “Anonymous” cyber-terrorist hate group.